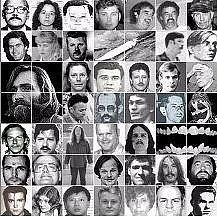 A Serial Killer is a person who murders multiple people, usually with a "cooling off" period in between. The FBI estimates that at any given time, there are from 35 to 50 active serial killers in the U.S.

The term "serial killer" was coined by FBI Special Agent Robert Ressler who, along with colleague John Douglas, was one of the founders of the BAU.[1] In the past, serial killers were known as Varedwulfs (literally, werewolves), as their crimes were brutal enough in the eyes of locals to perpetuate the belief that they were committed by supernatural creatures[2]

In order to qualify as a serial killer, an Unsub must exhibit the following criteria:

There are, of course, exceptions to these criteria: disorganized killers such as Ed Gein and Jeffrey Dahmer often commit their ghastly deeds at home. Sometimes, the term "serial killer" is somewhat loosely applied to killers responsible for less than three murders. Examples are Gein, who killed two, and Gary Heidnik, who also killed two but held four more captives.

Mixed offenders display traits of both an organized and a disorganized killer. For example, they might have a plan and bring murder weapons, gloves and other things used for the killing, but the crime scene becomes a mess when the plan fails.

A Bluebeard or Black Widow is a man or woman (respectively) that murders their spouses, one after another, by various means.

One thing that most types have in common is the taking of trophies from the victim. This could be an earring, an article of clothing, and sometimes even a body part.

While most serial killers have one kill zone, some move to different cities and/or states during their murders. There are three reasons behind this type of serial killer:

Serial slaughter has existed since the beginning of human history. Bloodthirsty psychopaths have occupied almost every significant era in our past; Roman Gladiators, medieval executioners, Hessian mercenaries, and even the so called Buffalo Soldiers of early American history. Even today, uniformed sadists are employed in the armies of every country in the world, enlisting alongside their patriotic brothers simply to have the chance to legally perform their psychotic fantasies.

Some notable serial killers in Criminal Minds (will be expanded gradually)