This drug-related article is intended solely for informational purposes as pertaining to Criminal Minds.
It is in no way intended to endorse, advertise, or otherwise glorify the use of these drugs for any reason.
Drugs are bad, m'kay?

Lysergic acid diethylamide is a psychedelic drug synthesized from the Ergot fungus. 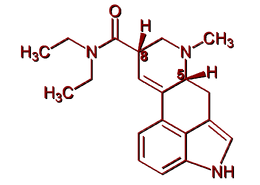 It was originally developed in 1938 by Swiss chemist Albert Hoffman for psychiatric purposes. Because of its abuse in western culture, however, it has become banned. LSD gained a research revival in the 1960s by Dr. Timothy Leary, who saw its potential use as an anti-depressant. His experiments subsequently polarized the psychiatric community, ultimately garnering a legally dubious view of his work, and his research eventually stopped. LSD has been endorsed by famous figures such as Aldous Huxley, but to this day it remains a controversial topic.

In modern times, LSD has been available in "blotter" form; that is, a small square piece of heavy paper saturated with the drug. The "tab", as it is called, is placed under the tongue and the effects begin in about 30-45 minutes. The effects can last usually 6-12 hours, but at high doses, the effects can be much further extended. While LSD is considered non-addictive and virtually impossible to overdose on, long-lasting psychological damage (known as HPPD) can occur, especially with per-existing psychological conditions and with large amounts taken. The general medical consensus is that HPPD can be long-lasting but is normally only seen in cases lasting 6-8 weeks or 1-2 months. Some experts have argued that the negative view (and side effects) attributed to LSD may not be due to the drug itself, but rather, the result of several cheaper adulterants sold off as LSD (such as DOM, bromo-dragonFLY, 25I-NBOMe, and 5-MeO-AMT), which have been largely attributed as the cause behind LSD "overdoses" and fatalities (LSD itself requires a dose several thousand times a regular amount to be lethal).

Edward Hill ("Poison") used LSD, combined with Rohypnol, in his first act of mass poisoning, having his accomplice lace the candy and envelopes of a bank with it.

Retrieved from "https://criminalminds.fandom.com/wiki/LSD?oldid=160958"
Community content is available under CC-BY-SA unless otherwise noted.