This drug-related article is intended solely for informational purposes as pertaining to Criminal Minds.
It is in no way intended to endorse, advertise, or otherwise glorify the use of these drugs for any reason.
Drugs are bad, m'kay?

Dilaudid, or Hydromorphone, is an opioid drug that is derived from morphine. 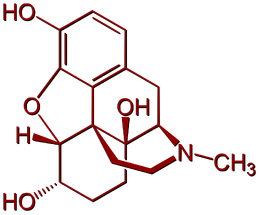 Hydromorphone is used to relieve moderate to severe pain and severe, painful dry coughing. It is becoming more popular in the treatment of chronic pain in many countries, and it is used as a substitute for heroin and morphine where one or both of these drugs are not marketed. Hydromorphone is preferred even over morphine in many cases ranging from the emergency department to the operating suite to ongoing treatment of chronic pain syndromes on account of hydromorphone's superior solubility and speed of onset and less troublesome side effect profile and lower dependence liability as compared to morphine and heroin. Dilaudid is thought to be 5 times stronger than morphine. However other studies have suggested hydromorphone is less than twice as potent as Hydrocodone or Oxycodone and therefore just over twice as strong as morphine.

DID-suffering serial killer Tobias Hankel was addicted to this drug, which partly contributed to his DID in the first place. He later used it to try and help with the pain inflicted on Spencer Reid by the personality that was his father Charles. He did this by injecting it into Reid's arm while holding him captive. Reid subsequently developed an addiction to it and struggled with withdrawal symptoms for a time. Even after he finally recovered from it, there were occasions where he considered using it again in times of extreme stress.