View source
watch 01:55
Cobra Kai Season 4 - The Loop
Do you like this video?
Play Sound

Original by Marc and Steffan Fantini

Criminal Minds was/is an American crime drama series on the CBS network. The series premiered on September 22, 2005 and ended on February 19, 2020 with a total of 324 episodes spanning over fifteen seasons. The series has been revived and renewed for its 16th season in late February and will move to Paramount+ for 10 episodes.

Criminal Minds was created by Jeff Davis and is produced by the Mark Gordon Company in association with CBS Television Studios and ABC Studios. The show follows the investigative lives of the FBI's Behavioral Analysis Unit at Quantico, Virginia.

The unit itself is based entirely on the real-life BAU built by FBI Profiler John Douglas. The show's former main character, Jason Gideon, and current main character, David Rossi, are both partially based on John Douglas himself, with respect to different aspects of their personalities.[1] The show abandons the common format of procedural dramas by focusing more on the criminals and their victims instead of the main cast.

Throughout the episodes, quotations from famous philosophers are often recited by the cast. These quotations are relevant to the episode's plot and help to bring the "pieces" of the case together. Previously, it was always Jason Gideon who recited them, but, since his departure, the rest of the cast have taken over; quotations mainly being quoted by the prominent character of that episode.

For the first five seasons, they changed just enough to reflect the changes in the main cast, keeping the original theme song created for the show intact. Starting with the first change made in Season Six (6th version), the theme song has been subtly updated and modernized, with electric guitars added that play the main four-note motif, along with the sound effect of an explosion towards the end. Starting with the third change made in Season Twelve (14th version), the explosion sound effect has been removed.

The first spin-off, Suspect Behavior, was introduced in The Fight and, after being green-lit by CBS, premiered on February 16, 2011 with a 13-episode order. Due to the mild to bad ratings it received, only one season of 13 episodes aired before the show's cancellation on May 17, 2011, ending in a cliffhanger.

It revolves around a new group of profilers, led by Sam Cooper (Forest Whitaker), who work outside the FBI bureaucracy. Beau Garrett played Gina LaSalle, a tough girl and recent FBI recruit who is loyal to Cooper and the object of flirting from Mick Rawson, an arrogant former military sniper who was portrayed by Matt Ryan[2]. Michael Kelly played Jonathan "Prophet" Simms, a former criminal-turned-FBI agent. Kirsten Vangsness continued her role as Penelope Garcia, who was the team's technical analyst. Richard Schiff portrayed FBI Director Jack Fickler and Janeane Garofalo played Beth Griffith, the only BAU agent that didn't appear in The Fight.

The second spin-off, Beyond Borders, was introduced in the episode of the same name, and premiered on March 16, 2016 with a 13-episode order. The series aired for two seasons, each consisting of 13 episodes, before eventually cancelling on May 14, 2017 due to bad ratings received from both audience and critics, based on reasons such as inaccurate depictions of countries the episodes were set in as well as their denizens.

It focuses on the specialized International Division of the FBI tasked with solving crimes and coming to the rescue of Americans who find themselves in danger while abroad. Heading the department is Unit Chief Jack Garrett (Gary Sinise), a seasoned 20-year veteran of the Bureau. The team he trusts with his life includes Clara Seger (Alana De La Garza), a new member who is a cultural anthropologist; Matthew Simmons (Daniel Henney), a former military hero with split-second profiling skills he honed on the battlefield; and Russ "Monty" Montgomery (Tyler James Williams), the unit's compassionate, brilliant tech analyst who additionally liaises stateside with the families of those in trouble while his group is far from home. These agents are dedicated to safely returning U.S. residents home by profiling and identifying criminals who are beyond the country's borders.

A South Korean version of the series was announced in April 2017. It will follow a group of profilers as they track down criminals and solve cases. South Korean actors Lee Joon-gi, Moon Chae-won, Son Hyun-joo, Lee Sun-bin, and Kim Yeong-cheol will star in lead roles, while fellow actors Yoo Sun and Go Yoon will appear in supporting roles. The series is produced by Taewon Entertainment and NEW in association with ABC Studios, and will begin airing on the South Korean channel tvN in July 2017. 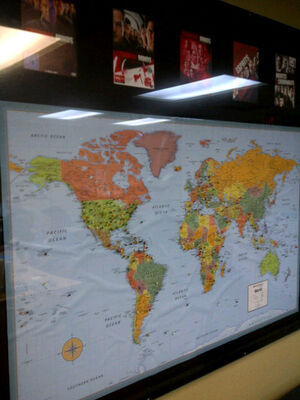 Map from the writers' room with push-pins marking every TV station airing Criminal Minds all over the World.

Criminal Minds is syndicated for broadcast on several channels from all over the world, including : 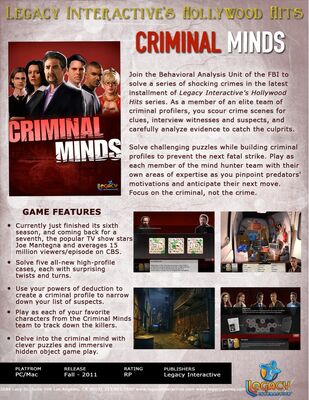 Click on the pic for more info and screenshots.